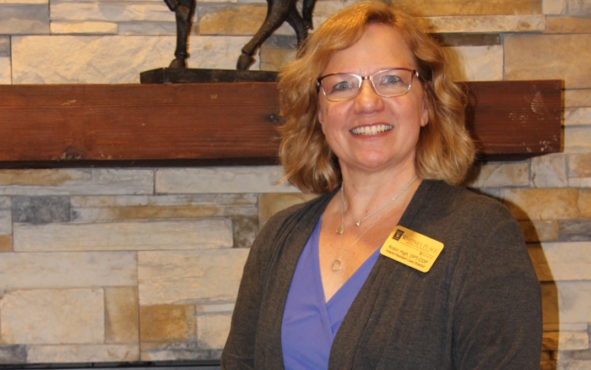 One of SALMON’s long-serving employees, Robin High, has made a career of seizing the opportunities available within the organization to build her skill set and climb the SALMON career ladder.

Robin officially passed her final test to become a licensed nursing home administrator this summer after completing a rigorous administrator in training (AIT) course at the beginning of the year, but her history with SALMON prior to that is extensive.

After receiving her Bachelor’s Degree from Northeastern University, Robin worked the first ten years of her career in outpatient physical therapy, before joining SALMON, where she has worked in various rehab roles for the last 15 years.

“The opportunity to work with so many great leaders and managers propelled me to aspire to do more in this organization,” she said, so she decided to pursue an AIT.

AIT training includes a series of self-guided trainings, exams and government paperwork, as well as on-the-job training led by a nursing home administrator, which in her case was Andrew Salmon.

Requirements for becoming an administrator vary, but Robin specifically had to complete 960 hours of training over five and a half months. Coursework focused on five areas: management and leadership, environment, financials, human resources and customer care. The coursework with Andrew, she said, was cultivated to focus on quality census and staffing.

Since becoming an administrator, Robin has been working closely with the leadership team, playing a versatile project management role in several communities.

Currently, she is spending time in Sharon working with the wellness team to develop a model for successful operations.

Robin said the opportunity to become an administrator was “really an act of service from the company because they had to use their time to train me, and it also took away my services in my previous role … I’m extremely thankful from their confidence in me and individual guidance with me as a leader in the organization.”

Your browser is out-of-date!

Update your browser to view this website correctly.Update my browser now